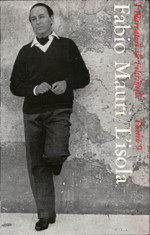 Fabio Mauri is an artist whose work has great culture value and who dedicated most of his artistic career to the theme “war”, which he interpreted as “conflict”, a key word that has travelled through the Twentieth Century and through human history. This word can also refer to the inner conflicts that leave a deep mark in the Man of the Twentieth Century. The inner conflict of a castaway on a desert island is the theme of this comedy in two acts, presented by Fabio Mauri in 1966.