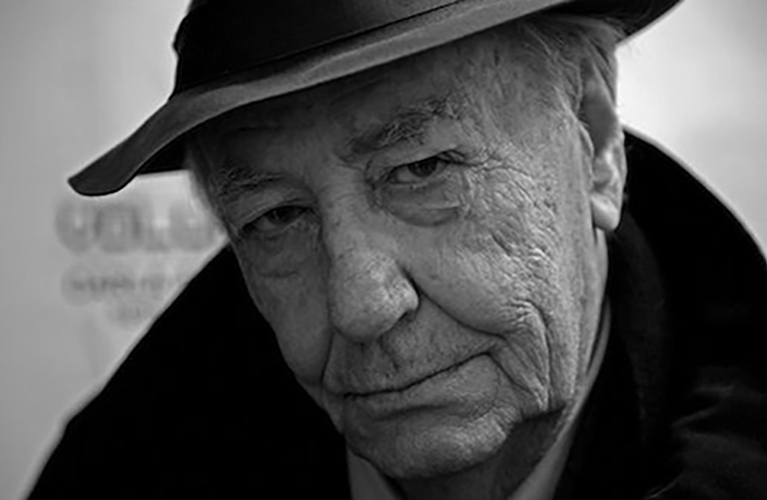 Mauri’s first solo show at the Galleria L’Aureliana (Rome, 1955) was opened by his friend Pasolini. In late ’57, he drew his first “Schermi” [Screens], his version of the monochrome: the desire to find the absolute zero of painting that was engaging all the prominent artists of the time. In Mauri’s monochrome, however it is already possible to find his reflection on the cinema: the screen was the new true “symbolic form” of the world, and Mauri was able to grasp this immediately, all at once. The mental form of the screen will run through all of Mauri’s work. In 1964 he started reflecting on the specificity of the European culture, which he found in ideology. “I looked back over my life and realised that I had witnessed an important historical event: the war. I had repressed all that pain as if it were a horrible accident, and then I re-lived it”, the artist said. This is the time when he started composing his performances of the ‘70s: Che cosa è il fascismo [What fascism is], Ebrea [Jewess], Gran Serata Futurista 1909 – 1939 [A Futurist Grand Soirée 1909 - 1939]. Fiction is another way to bond with the spectators, to create a network of sensations between the action and the audience. From the painting to action, the step is unavoidable. The idea overflows from the borders of the canvas through the acts of a not-yet-digested, eternally-unbearable past. The performances of 1971, Ebrea [Jewess] and Che cosa è il fascismo [What fascism is] are therefore emblematic of this phase. The latter was first composed in Rome and it then arrived in Venice (1974), New York (1979), Prato (1993) and Klagenfurt (1997). The first retrospective of his work was held in 1994 at the Galleria d’Arte Moderna e Contemporanea (Rome), followed by a second at the Kunsthalle in Klagenfurt (1997) and a third at Le Fresnoy (Lille, 2003).

In 1968, together with Balestrini, Sanguineti, Eco, Porta, Barilli, Filippini, Arbasino, Colombo, Manganelli, Giuliani, Costa, Celli, Guglielmi, Pagliarani, Mauri is one of the founders of the magazine “Quindici” [Fifteen]. In the ‘70s, Mauri’s work focused on ideology as subject/object of the expressive acts. The text of the performance Che cosa è il fascismo [What fascism is] (1971, Edizioni Krachmalnicoff), is a critical-ideological analysis of languages, which is followed by the books Linguaggio è guerra [Language is war] (1975, Marani Editore) and Manipolazione di cultura [Manipulation of culture] (1976, La Nuova Foglio). In the same year, Mauri started the art magazine “La Città di Riga” [The City of Riga] with Alberto Boatto, Maurizio Calvesi, Jannis Kounellis, Umberto Silva. Fabio Mauri weaves together the dimension of the performance and the space of history. The use of the body as screen in Il Vangelo di/su Pier Paolo Pasolini [The Gospel according to/on Pier Paolo Pasolini] at the Galleria d’Arte Moderna (Bologna) is unforgettable. And Che cosa è il fascismo [What fascism is] is even more central: an extraordinary performance presented at the Stabilimenti Safa Palatino (Rome 1971), at a time of serious political tension.

Several important themes can be found in Mauri’s work, all shaped into his works of art: the Screen, the Prototypes, the Projections, the Photography as Painting, the substantial Identity of Expressive Structures, the lasting relationship between Thought and World and between Thought as World. Mauri’s work, as complex as an history essay, becomes his autobiography, compact and uniform in its development and multifaceted in the attention to the contemporary world: an analysis where the fate of the individual and history co-exist.

In 2009 he was made Grand Officer of the Order of Merit of the Italian Republic by Giorgio Napolitano, the President of the Italian Republic. On the 20th of May of the same year, after receiving the news of Fabio Mauri’s passing, Napolitano expressed his condolences to the family with a message in which he stated that “Fabio Mauri’s intense activity of artistic creation, committed to the never-ending quest for and openness to the new, and his engagement in the promotion of culture (…) made him one of the most prominent voices of the Italian artistic and cultural scene”.