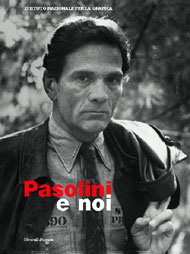 This exhibition (Turin, November - December 2005/ Rome, December 2005 - February 2006) deals with the relationship between art and cinema, and it explores the work of some contemporary artists - among which Fabio Mauri , Tracey Moffat, Adam Chodzko, Grazia Toderi, Giulio Pasolini - on the life and work of one of the most interesting Italian intellectuals of the post-war period: Pier Paolo Pasolini. Pasolini himself, who had been student of Roberto Longhi at the University of Bologna, was deeply influenced - especially for his films - by figurative art, considered as the main true source of inspiration: the clear influence of painting on his style is also showed by the high number of references and quotations in most of his films. The catalogue also includes texts by the curator of the exhibition, by Achille Bonito Oliva, Giacinto Di Pietrantonio and Francesco Leonetti, the “voice of the raven” in The Hawks and the Sparrows.