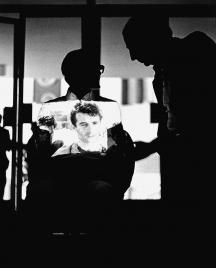 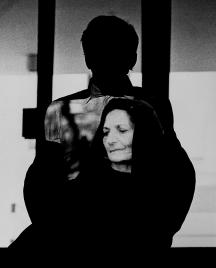 “The Gospel According to St. Matthew” by/on Pier Paolo Pasolini. “The film (the work) represents every work. The author represents every author (every intellectual). In the entirety that every work, even the most hideous, always simulates, the work of art is a completed form of verticality thrown out of time and exempt from the wear of duration. The work is always liberation, and the political or ideological work is twice as liberation, because it takes for known, if not for solved, the problems it dealt with. In this station, everything the author hoped he had left behind is sadistically thrown back at him. The film (the work) is projected onto the body of the director: his chest, dressed in a white shirt, is the screen. His chest becomes a mirror, an x-ray of the intellectual subjectivity of the artist and of his conscience”.

What Alberto Boatto wrote about Intellectual well captures the essence of the performance with Pier Paolo Pasolini which was presented at the Galleria Comunale in Bologna in 1975. I only wrote brief theoretical essays on these “Projections”, since the surplus of identity of the “action” itself has always prevented me from talking extensively about it. The viewers are bewildered by what they are witnessing, by this action conceived in the laboratory and its violent implications. The projection creates a unique effect: it physically reveals the birth of the “intellectual sign inside” the body of the author, and it has the technical precision of an x-ray of the spirit. There is more: the superimposition of one of the author’s passions upon the author himself, who seems to become physically responsible for what he created. The film violently pierces its function and bends into a complex form of image. The viewer is disoriented by the unusual scene and by the added value of the presence of the author himself, who doesn’t stop meaningfully interfering during the whole narration. Pier Paolo Pasolini, as previously done by Miklòs Jancsò, agreed to take part in the project and was immediately engrossed in it: he dived into the effort of remembering, little by little, what was being projected on him, the images and the forms. He is compelled by that “spiritual exercise” to go back to the primary reasons behind the creation of the work, which, apart from some minimal variations of shadow and light, he could not verify with his own eyes. Being illuminated by the projection of his film, Pasolini seemed to become responsible for the real contents of his imagination: as if, instead of seeing them, he had to fight their backlash. Furthermore, words, onomatopoeic sounds and music become the protagonists and coordinated signs which help the artist reconstruct the images which had become, for him, invisible. Coincidentally, something else happens: the identity of the author becomes materially clear and confirms itself in a simple yet effective way. Author and work create a solid sculpture of flesh and light; thanks to the power of a “vision”, they prove to be one. At a time of conceptual debates, the aim of my performance was both analytical (I treated the performance as an experiment of physics) and ideological. Through that ritual I wanted to recall something obvious: that the forms of expression were nothing else but “real” meanings, in the sense that they were implicit to the “moral” universe of man. This was, to me, encompassed in the word “intellectual”. For the followers of the different schools of thought of the time, this truth was not as self-evident as it seems. I wanted to create (outside the conceptual tautology which, as a matter of fact, excluded it) a physical bond between poetry and world by recalling through different means and from “un-realist” perspectives the essential concept of truth, which for Pasolini was always central and that he never forgot. Thanks to the emotions that the action provoked and that the superimposition on the author doubled, I wanted to reiterate the idea that art cannot help but creating a very uncontemporary system - the basic system of values. This was the necessary function of language, and it was almost impossible to elude the demonstrative eloquence of art, as proved by the seductive force of that action. The performance presented on 31 May 1975 and with Pier Paolo Pasolini was an additional display of our friendship and life, especially of mine. It was as if, as a wind that finally ceases to blow, the agitation of our passions had stopped and made way for a clear landscape where everything, even the past and the dangers we miraculously escaped, fit in a wise order that made us become what we had been during that “intellectual” endeavour: survived, friends, calm after all and respected for the ideals of poetry and art to which we had been, beyond any personal achievement, faithful. This was shortly before Pier Paolo Pasolini died. That night in Bologna, so crucial because so final and clear, is to me a demonstration of the sweet firmness of poetry, that captures our world and everything in it so that they exist. Or to explain them and, fatally, clarify them.

*Pier Paolo Pasolini. A future life. The form of the gaze. Catalogue of the exhibition held at the Trajan’s Market in Rome in 1985