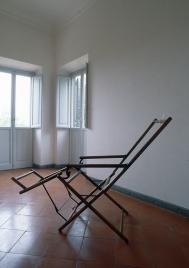 Chaise Longue is the brilliant solution found by Mauri to the impossibility of recreating, for the “Città e Natura” exhibition (1997), the installation I numeri malefici [Evil numbers], presented at the 38th Venice Biennale. Due to organisational problems, the measurements previously taken proved to be wrong: it would have been necessary to knock down a newly renovated door and to shut a window.

Mauri suggested that his Chaise Longue, Russian and symbolic, could be used instead. An object meant to be used for an absolute relax, but whose use was not possible because of lack of the strip of fabric which was supposed to provide an intricate seat.

This is a metaphor for art as a non-solution, even when it is formally appealing.

Art, the author seems to say, never gives us a place to rest: it just promises one. This is how art - as a conceptually autonomous subject - and the artist - as an aesthetically passive subject - are both pushed by an indirect driving force that creates an endless need for art as a complex and complete solution. In vain, even if with a certain positive outcome, it renovates a not unhappy wait. (Dora Aceto)

2008 - Interiors, Galleria OREDARIA, Rome, curated by Achille Bonito Oliva (With a picture of the family of the artist, with his five brothers: Luciano, Silvana, Ornella, Achille and Fabio in picture taken in 1940 on a hut in Rimini)