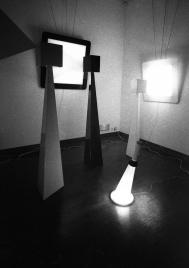 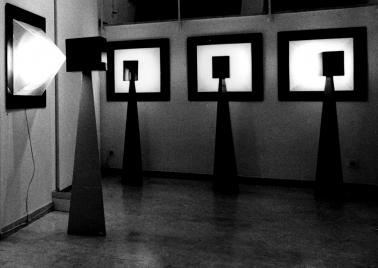 The installation Cinema a luce solida [Solid light Cinema], realised in 1968, consists in a projector made of plastic and neon lights. It reminds us of the “Lampadine con i raggi solidificati” by the two Futurists Depero and Balla.

With his work, the artist gives concrete form to the idea of “projection”, he transforms light into a solid body.

He moves from the assumption that in life everything, including the thought, is real. The corporeality of the projection here anticipates the further development that this idea will have in the cinematic reflection of the Screen and the Projections. It is a metaphor of the relationship between mind and world, between the memory of things and their recognisability and evolution. (Dora Aceto)

1999 – Il popolo della notte illumina l’arte delle città [The people of the night light up the art in the cities], National Gallery of Modern and Contemporary Art, Rome