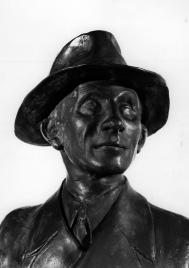 Entartete Kunst [Degenerate Art], the exhibition presented at the Galleria Mara Coccia in Rome in 1985, deals with the relationship between Art and Ideology, a central topic not only in Mauri’s work, but also in the politics of the 19th century.

Entartete Kunst is the name of the exhibition organised by the Nazis in Berlin, Leipzig, Düsseldorf and Salzburg to display those pieces of art that were considered “abominable”.

In his exhibition, Mauri recreated the original writing on a long canvas: ENTARTETE KUNST, Degenerate Art. Underneath, two large oil paintings, one red and the other yellow. In front of the two monochromes, which symbolise the modern avant-garde, there is the bronze statue of a man: the model for the statue is a picture of Goebbels taken during the opening of the exhibition in Berlin in 1938. Goebbels’s face conveys his contempt for expressionist art: his expression is that of someone who knows what truth and quality really are.

On the side wall, the A of “ENTARTETE” becomes the point of intersection of the exhibition. Besides underlining the ideological error, the letter can also turn into a painting: art can overturn and absorb everything, even the negation of itself. Art can survive to politics and to the environmental policy that surrounds it. (Dora Aceto)