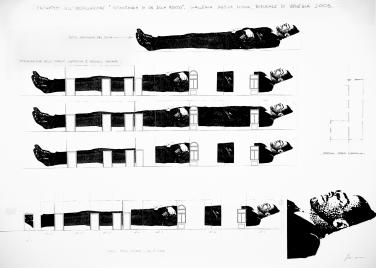 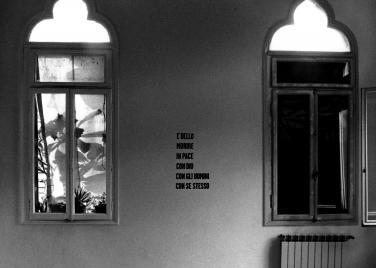 Istantanea di un duca morto [Snapshot of a dead Duke] is presented during the 50th Venice Biennale in 2003 at the Nuova Icona Gallery.

It consists of a photograph of the Duke Amedeo d’Aosta, who had recently passed away. His body visually stretches over a horizon which enables him to overcome the dramatic end of life. The image of the Duke visually goes in and out of the rooms and the hallways of the house of the gallery owner Vittorio Urbani: his body is transformed into a steadily obsessive and constant, essentially unstoppable thought that meaningfully reflects on the conventional awkwardness of death.

Istantanea di un duca morto is expression of the human condition in front of mystery. The artist deals with the story of the universe, with what is different from us, with the peaceful, almost mysterious end of a man who took part in the power and war events of his age. When death comes, it seems that judgement is suspended in a universal, perhaps religious amnesty. (Dora Aceto)