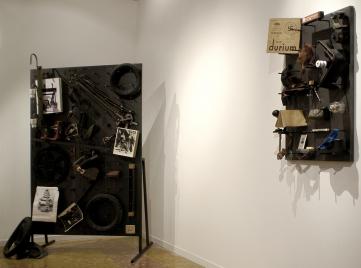 Mia cugina Marcella e la guerra civile [My cousin Marcella and the Civil War] is an exhibition which includes ideological works and performances that was presented in Barcelona in 1999.

Some pieces are on display for the first time.

The theme is the Spanish civil war, in which many Italians took part. In the exhibition, a young man hands out to the visitors a typical Spanish dish, and points to a young woman, on whose back the film La ballata di un soldato [A soldier's ballad] by Grigorji Chukhraj is being projected.

The sweetness of life and the bitterness of death interweave and sediment on things.

Some everyday objects that are not explicitly dramatic are fixed to a wooden board: a photograph of military airplanes contrasts with that of a woman holding her daughter’s hand whilst they flee from an air raid; a bag of the Italian Red Cross (Marcella, the artist’s cousin, was a nurse in the International Brigades), a pair of stitch scissors, some stamps, a film canister, some motorbike tyres, photos and other unaware but involved objects.

The artist’s work tries to identify the mystery of “things”, which survived to the fingers and to the minds of the people who created them and that now bring their human trace.

It is the memory of war during a moment of peace at the end of the century.

Sweetness and violence frenetically flow together without being afraid of each other: they make war abstruse and life essential.