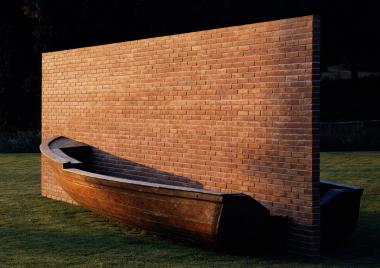 Muro d’Europa / La barca [The Wall of Europe / The boat] is displayed in Amsterdam at the De Appel Foundation in 1979. It consists in a brick wall that divides lengthways a 8-meter-long wooden boat.

The reference to the Berlin Wall, a scar that goes through the entire Europe, is clear. As Mauri himself reminds us: “[...] The Wall of Europe is the tactile symbol of the division we can find in ideas such as modernisation, time, future, common life in Europe”.

The Muro d’Europa inaugurates a series of installations realised during the ‘80s and ‘90s. In Italy, the first work was presented at the National Gallery of Modern and Contemporary Art in Rome in 1994, During the Fabio Mauri. Opere e Azioni 1954-1994 retrospective. Today, the artwork is displayed outside the Galleria Nazionale d’Arte Moderna e Contemporanea in Rome. (Dora Aceto)

In the same year, Mauri presented the installation Muro d’Europa / L’Automobile [The Wall of Europe / The car] at the Galleria del Falconiere in Ancona. On this occasion, a car is divided into two by the brick wall.