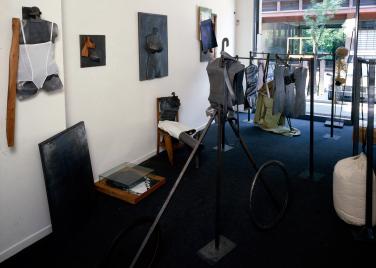 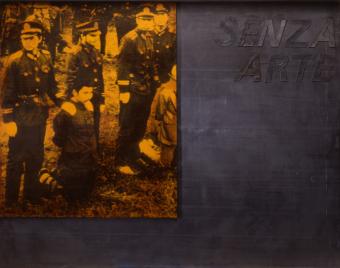 Studenti [Students], the installation presented at the Galleria Volpi in Milan in 1992, brings the audience to the classrooms of a school art during a hypothetical break. There are only a few traces of human presence, as if the performance had already taken place. Besides the tables and tools, there are the materials used during the exercises, often left incomplete: paintings, photographs, sketches and schemes. The theme of the projects of the students, who work in an abandoned environment where lead is mainly used, is the student-led demonstration and consequent massacre known as the “Tiananmen massacre” that took place in China in 1989. Among the works there are pictures of young men bent on their knees who are about to get executed by other young men in uniforms: their expressions are equally lost. The artist represents these young people, here unknowingly victims of themselves, at the mercy of some of the most tragic events in human history, as well as the violent and unfair conflict between the old and powerful generations and the biologically and culturally unaware young generations. This had already been the theme of some of Mauri’s most famous performances, like Che cosa è il fascismo and Dramophone. (Dora Aceto)