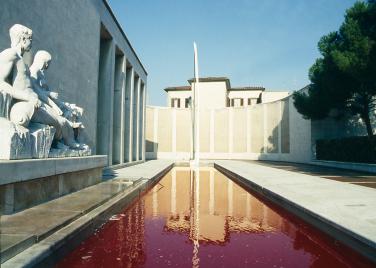 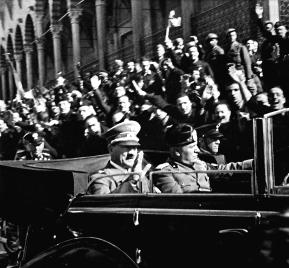 In September 1980, Mauri takes part in the event Umanesimo/Disumanesimo nell’arte contemporanea [Humanism/Inhumanism in Contemporary Art]. Among the several options offered by the city, the artist chose the long and narrow pool of the Palazzina Reale di Santa Maria Novella.

Mauri worked with a very rationalist structure, built on occasion of Hitler’s visit to Florence in 1938 and that the artist attended along with the different organisations of the Italian Youth of the Lictor of Bologna.

Red dye was poured into the water, a white flag was raised on a pole and its end dunked into the water, where it slowly absorbed the red dye. The symbolic blood of the pool built in honour of the Führer, as well as the slow agony of the artist’s canvas, are metaphors for the way in which thought and culture are oppressed and distorted by two dictatorships.

The blood-soaked white canvas has a further symbolical value: it also refers to the painful times of the Years of Lead, vividly remembered by intellectuals and artists. (Dora Aceto)