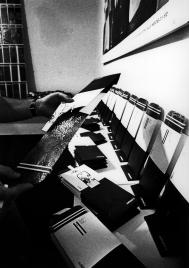 Vomitare sulla Grecia [Throwing up on Greece], the first “Multiplo Politico” [Political Multiple] realised by Fabio Mauri, is presented at the Centro Multipli of Rome in 1972. This work is characterised by a critical and political reflection on the uniqueness of the work of art, it is an artistic action aimed directly at a political target.

The artist imagines to “throw up on the Piraeus” of the colonels: he creates 500 sickness bags (like those given to passengers on board airplanes) full of resin, rice and other materials that look like thickened vomit.

Mauri is not interested in the mechanical reproduction of images: he believes that copies and multiples exist inside our thoughts and intentions, that they are more like a series of unique pieces.

“Vomitare sulla Grecia” is a political accusation expressed through a real artistic multiple, both serial (the sickness bag, the graphic) and singular (each vomit is differently placed inside the fiberglass).    (Dora Aceto)