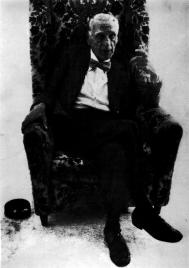 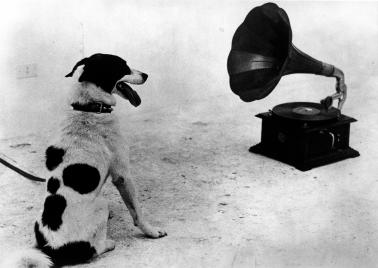 Dramophone is presented in 1976 at the Cannaviello workspace in Rome. The performance is divided in three “stations”: in the first station, Pessimism, there is a real dog sat in front of an old gramophone, a reference to the record label His Master’s Voice of the Deutsche Grammophone as ambivalent image of the world. On the wall, there is the picture of a big vinyl, metaphor of a world that is already recorded: the predetermination of destiny is a recurrent feature in the author’s work.

In the second station, Scepticism and pain, a group of young men and women in the audience dance to revolutionary songs, next to a basket of red roses and in front of the full-size picture of the poet Majakovskij, great intellectual, and of General Huerta, the killer of Emiliano Zapata, Mexican insurgent and virtuous symbol of rebellion.

In the last station, Cynicism, psychology and virtue, the old actor Fjodor Chaliaplin Jr., son of the great Russian bass Chaliaplin, sits on an armchair and tells the story of his life.

Chaliaplin, here in the role of the “talking screen”, brings his memories to life. He is a witness to history: as a kid, at the court of the Zar in 1910; as a young man, during the Russian Revolution in 1917. The actor answers to the questions of the audience in Russian, and his Italian-Russian friend Dimitri Tamarov translates for him. The answers of this living witness to history upset the audience. When he is asked about the days of the Revolution, Chaliaplin replies: “Believe me, the Russian Revolution was just a big accident”. The crowd is shocked.

After running away with his family (his mother was an Italian ballerina of the Bolshoi in Moscow) during a tour in Switzerland, they moved to Germany. It was the 1930s, and Nazism was on the rise: the Chaliaplins had to flee again, this time to the United States, where the New Deal was starting to take shape. During the Great War, Fjodor Chaliaplin Jr arrived in Rome with the US army: once the war was over, he settled down there. Before his death, he started again his acting career in Italy:

he played the part of the blind monk and killer in Umberto Eco’s The Name of the Rose.

“Witnessing history is not enough”, Mauri says “We need a rational method to find our way.

Without history, i.e. without a critical analysis, it is not possible to form a judgement. This is history: the possibility to form a definitive judgement”.

In this last station, a (non-)image of the different histories of the world is presented, which stresses the usefulness of the historical-critical method to make a final judgement which is formed by the memory projected into the present. By looking at the recurring mechanisms of present-day happenings, we can give an interpretation of history. (Dora Aceto)