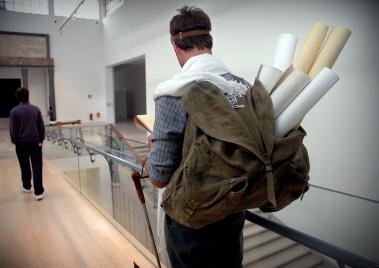 L’Espressionista [The Expressionist], 1982, is a performance taken from Gran Serata Futurista 1909-1930 (1980). There is a young man wearing skis, dressed up as an old-fashion skier, who wanders among the audience, looks at the world and portrays it. “He takes off the skis, walks up the stairs, puts them back on. Every now and then, he grabs a pencil and a piece of paper and starts drawing what he sees: a female body, a table, a plant. He distributes his drawings to the audience. Woodcuts by Heckel, Muller and other young expressionist artists pop out from his backpack. The fact that he is wearing skis transforms the relationship of the subject with the Theatre or the Museum: it introduces an element which is unavoidably external, the unwelcoming and isolated presence of the artist,” Mauri himself writes. He is the symbol of beauty looking for truth. In his work, despite the fatigue, he completes a journey: that of art. (Dora Aceto)

1993 – Inside out, Museo Pecci, Prato, curated by Ida Panicelli