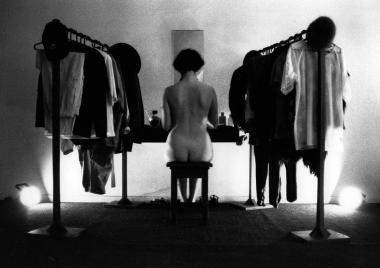 Senza Titolo [Untitled], 1992 is a performance presented at the Studio Casoli in Milan, simultaneously with other two performances: Ebrea [Jewess] and Natura/Cultura [Nature/Culture]. The theme of the performance is the removal of every ideology as extreme thought, the disappearance of the body as foundation of identity, its transfer into simulacra, i.e. into a whole multitude of the attires. Here, nudity represents the lack of foundation, the impossibility to decide. In putting on and taking off her clothes in front of a mirror and of two rails full of different outfits, the woman is looking for an identity in a world where the destruction of all values and of ontology makes every decision-making impossible.

The naked body disappears and becomes one of the clothes.