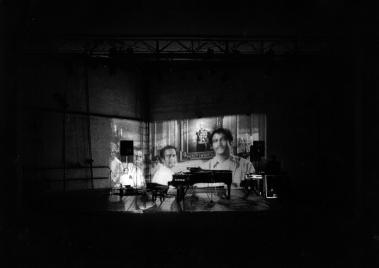 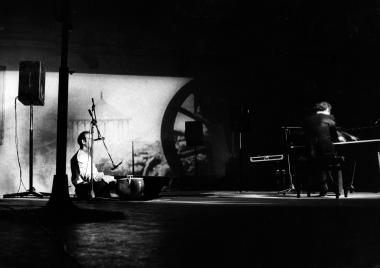 Toccata su figure ostinate [Toccata on stubborn characters] is a piano and sitar concert performed in 1984 with the Beat 72 (Centre for Theatre Research and Experimentation). Mauri takes up the challenge of transforming the dimension of the concert into a performance: he projects the film “Que viva Zapata” by Elia Kazan on the musicians and the instruments. He introduces in a rigidly-structured liturgy images that, although not equivalent, are thought to be identical just because they are organic linguistic sets in the analogy of two similar expressive systems. The doubt of an unity that can emerge from the difference is instilled again. Poetry - or the attempt to create poetry - is obsessive. The concert has its experimental nature typical of the avant-garde artists who fought with their bare hands the crude identity of the languages. Brando, Neri, Zapata, perhaps the author himself - a series of probably stubborn characters for which the author creates his toccata. (Dora Aceto)