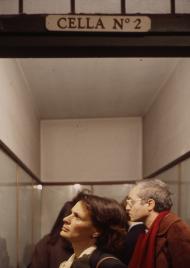 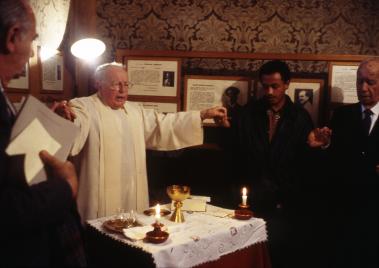 Via Tasso: Un appartamento [Via Tasso: an Apartment] is a performance held at the Museo Storico della Liberazione in Rome on 24th March 1993, for the anniversary of the Fosse Ardeatine massacre. This place, the last address of many of those who died during the massacre, was first rented out to the German Embassy and then turned into a SS political prison. On its walls, it is still possible to read all the signs, the signatures and the final messages of those sentenced to death.

The performance is conceived as a religious rite officiated in the former Nazi prison. The original project was to have two rites, Christian and Jewish. The artist’s intervention consisted in introducing the performance and in the silently taking part to the functions, both taking place on the unobtrusive background of the first white Screen (1957). (Dora Aceto)