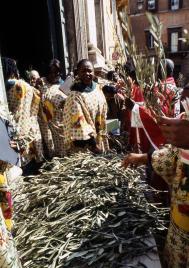 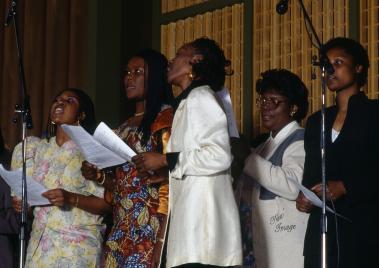 Zaire 1995, Zaire2 1997, are performances without plot. On-the-spot and without rehearsal, nothing is staged: only the expressive body language of the actors and their way of laughing, talking, and singing constitute the subject matter and the life-resembling plot.

Mauri introduces the black church choir of a community in Zaire that sings its prayers with body and mind: the lyrics are taken from the Bible, but they sing in their mother tongue. Their unity doesn’t come from exercise or study, but from their rural traditions and their cheerful improvisation.

This humanity comes from nowhere else but from God.

With a power of expression which is difficult to explain, body and spirit are tied together with such a spontaneity which is rare to find in the Western pietas. A cheerful God blesses these wonderful and not-indifferent creatures; he seems to sing with them and to listen with content.

This theme introduces a different manifestation of the same religiousness: an intellectual control of Western and non-Western pietas. (Dora Aceto)