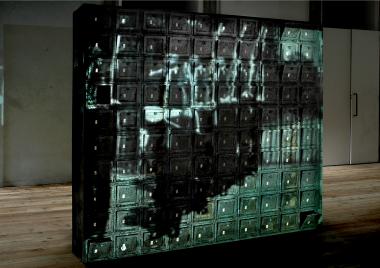 The work Rebibbia, presented at the Galleria il Ponte in Rome in 2007, is a chest of several and small half-open iron drawers. These drawers represent the lives that have been lived and lost, as if evaporated, on which Mauri projects the film Ballad of a soldier, directed by Grigory Chukhray. This film is projected onto different works. The plot is complete: life, joy, pain and death are perfectly mixed. The drawer is an old piece of furniture found in the Roman jail Rebibbia, whose painful history is connected to the Nazi occupation. The events of the war, here interwoven with ordinary and common lives, underline the significance and the relevance, until when its “actors” disappear, of a modern existence witnessed thanks to an undeniably true account.

Rebibbia is a new type of work displaying a kind of expression developed thanks to the Proiezioni of the mid 1970s, i.e. the projection of art films on unconventional “screens”, properly or improperly historical. (Dora Aceto)