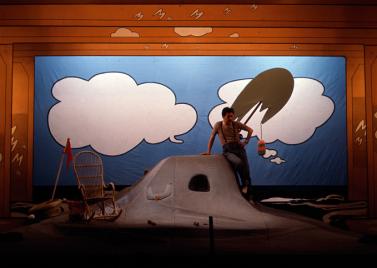 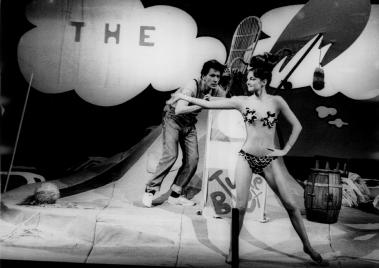 The play L’Isola [The Island], written in 1960 and performed at the Teatro Stabile in Rome in 1966, is a monologue in two acts and two scenes with Alberto Bonucci and Rosemarie Dexter, music by Gino Negri.

The date, set, costumes and structure of the play clearly refer to the use of comic books as new popular code. The plot is a delirious stream of consciousness and imagination brought on stage as if it were an art exhibition. The use of the materials is highly indicative: yellow canes, white bear fur, black rubber, jeans. Nothing is faked. All the objects are used on stage as expressive material. The actors, like animated characters of a comic book, use the easy language of comic strips, which are, in their own way, sophisticated and often surreal and which the average man has been used to since his childhood. (Dora Aceto)